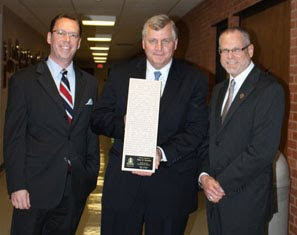 “The Deputy Attorney General is the second highest official in the U.S. Department of Justice,” said Assistant Professor of Law Lucian E. Dervan, “and his responsibilities include not only advising and assisting the Attorney General in formulating and implementing Departmental policies and programs, but providing overall supervision and direction to all organizational units of the Department.”

Grindler, who grew up in St. Louis, MO, rejoined the Department of Justice in 2009 as deputy assistant attorney general in the criminal division before his appointment earlier this year by Attorney General Eric Holder to his current position.

Grindler received both his law and undergraduate degrees from Northwestern University, and is a former assistant U.S. attorney for the Southern District of New York and the Northern District of Georgia. Included in his numerous roles within the U.S. Department of Justice, Grindler also was principal associate deputy attorney general and counselor to the attorney general, and assistant attorney general in the civil division. He also represented then-President Bill Clinton in his official capacity during depositions in two independent counsel prosecutions arising out of the Whitewater investigation.

Prior to his latest return to the U.S. Department of Justice, Grindler was a partner at King & Spalding, LLP, focusing on issues including white-collar criminal defense, internal corporate investigations, money laundering and search warrant compliance, and the Foreign Corrupt Practices Act.

“I had the pleasure of working with Mr. Grindler when we were both members of the King & Spalding Special Matters and Government Investigations team,” said Assistant Professor of Law Lucian E. Dervan.

Dervan added, “Mr. Grindler has demonstrated a continual commitment to public service throughout his career, and it is fitting that a law school dedicated to serving the public interest would turn to an exemplary public servant to deliver its commencement address.”

Click here for the SIU School of Law web page and podcast.

Click here for an article on the event in The Southern.