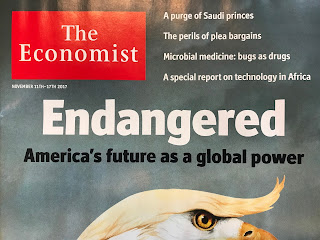 This week's The Economist magazine contains an article entitled "A deal you can't refuse: The troubling spread of plea-bargaining from America to the world."  The piece, referenced on the magazine's cover as "The perils of plea bargains," details the growth of plea bargaining around the world over the last two decades.  A recent study of the issue by Fair Trials International revealed that in 1990 just 19 countries used some form of plea bargaining.  That number is now 66.

In examining the issue of the global spread of plea bargaining, The Economist looked at the history of plea bargaining in the United States and its growth in the shadows of the American criminal justice system in the early twentieth century.  This issue is discussed in detail in my article entitled "Bargained Justice: Plea Bargaining's Innocence Problem and the Brady Safety-Valve," available here for free download.

The Economist article also discusses my research regarding the issue of innocence.  The piece states:

Researchers are starting to demonstrate how common false confessions are likely to be. In a study in 2013 by Lucian Dervan of the Belmont University College of Law, together with Vanessa Edkins, a psychologist at the Florida Institute of Technology, students were asked to solve logic problems, first in a team and then alone. An accomplice of the researchers asked half the participants for help on the second set. All were then accused of cheating and offered a “plea bargain” to avoid penalties that could include losing the payment for participation and having their supervisors notified. Nearly 90% of those who had aided the accomplice confessed. But so did a majority of those who were innocent.

Mr Dervan is now running studies in Japan, which is introducing plea-bargaining, and South Korea, which may do so. Japan, where criminal suspects may be held for 23 days without charge, often with only minimal contact with a lawyer, perhaps deprived of sleep, is already worryingly good at extracting confessions. Plea bargains are being brought in as part of the horse-trading over a larger criminal-justice reform, in which prosecutors opposed to routine recording of interrogations have managed to limit it, in exchange for formal recognition of plea-bargaining and other aids to investigating complex crimes.

Early results suggest that the “innocence issue” is universal, says Mr Dervan. Differences in legal systems do not change the rate of false confessions much. Another study he is conducting suggests that guilty participants are no more likely to plead guilty if offered a big incentive rather than a small one. Innocent ones, however, become more likely to make false confessions as the incentive—in other words the penalty for rejecting the deal—rises.

All this suggests that defendants should carefully weigh the long-term consequences of a guilty plea. But it seems they do not—even when explicitly nudged to do so. In a separate study, Mr Dervan found that informing participants about those consequences made little difference to the likelihood that they would accept a deal. “If pleading guilty means you get to go home, most will plead guilty,” he says. When the justice system is stacked against defendants, they are unlikely to gamble their futures for its greater good.

Some of the research referenced in the article can be downloaded for free here, including my article entitled "The Innocent Defendant’s Dilemma: An Innovative Empirical Study of Plea Bargaining’s Innocence Problem."  This is the piece regarding the psychological deception study discussed in The Economist.

It's wonderful to see increased discussion of the important role of plea bargaining both in the United States and internationally.  As the Supreme Court noted in 2012, ours is a system of pleas, not a system of trials.  It appears the same can now be said of many criminal justice systems around the world.
Posted by Lucian E. Dervan at 5:12 PM No comments: